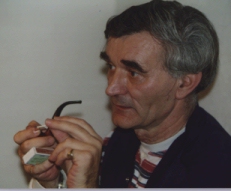 Born at Hastings, England, in1936, and educated mainly at Bruton Grammar School and later at The Open University, (graduating in 1994 with an Honours Degree in Arts Theory), the poet J. A. Bosworth spent twenty-four years as a British Army Officer. He saw service in such places as Suez, Cyprus (twice), Hong Kong, BAOR (Germany, three times) and, occasionally, England, Scotland, Wales and Ulster.

Retiring from the Army in 1978 to live in the Bath area, he was active in several different careers, including the ownership and management of two Retirement Homes (Aroona and Avoca) and a small hotel (The Tasburgh), as well as a short spell as Company Secretary of a small house-building business. Being qualified to drive every class of road vehicle except large tracked machines, he also spent time driving HGVs (Heavy Goods Vehicles) of different types and PSVs (Public Service Vehicles), including coaches and double-deck buses. In 1983-4 he spent a ‘sabbatical year’ composing poetry in Ireland at Coolmela, a rural cottage near Bunclody, Co. Wicklow.
A member of Mensa, The Society of Authors, The Open University Poetry Society and The Richard III Society, J. A. Bosworth published a hardback collection of his early work under the title Neknus and Other Poems in 1984. His other collections of poems, (which are waiting for publication), include Clouds of Glory and Other Poems, Natural Memories and Other Poems and Helvetian Harmonies. Between them, these four collections contain about 500 poems — some of which are of epic length, (e.g, Neknus, Clouds of Glory, Natural Memories, A Theory for Art and Œdipus), though his favourite genre is the Sonnet which comprises about 50% of his œuvre — covering a wide range of subjects and themes from nature and romance to fantasy, mythology, history, science, the arts and philosophy.

The father of five sons (1 deceased), grandfather of 8 adult grandchildren (1 adopted), quintuple great-grandfather, and an active member of an increasingly extended Anglo-Swiss family, J. A. Bosworth moved from Bath, (in May 1996), to the small rural village of Cugy (FR) in Switzerland — where, in March 2013, he became a naturalised Swiss but retained his British nationality — in order to dedicate himself to the writing of poetry, criticism of poetry and a series of volumes, (as yet unpublished), on New Traditionist Arts Theory. He is also an enthusiastic writer of letters and e-mails — on a variety of subjects — to politicians, the news media and magazines and an active supporter of a lifetime voting right for all British nationals, no matter where, nor for how long, they have lived abroad, because that is an inalienable natural right approved by the United Nations and International Law.

For long periods during his military and civilian professional careers J. A. Bosworth had few opportunities to compose poetry on a regular basis. Only during periods of leave, and during his year’s ‘sabbatical’ in Ireland in 1983-4 and since moving to Switzerland — both of the latter two being ideal environments for poetic inspiration, when he was also free from domestic and career concerns — could his poetic and literary output be considered as literally voluminous. (A persistent critical reviser of his own works, he considers that his latest amendment is definitive; until he himself changes it!).

J. A. Bosworth is sufficiently competent in the two languages to translate from French into English and vice versa. He also has a working knowledge of Esperanto and a smattering of Swiss German and Latin. (That’s not to mention ‘military demotic’ and ‘trucker’s argot‘!).

J. A. Bosworth describes himself as a New Traditionist poet, and most of the poems published here are representative of his New Traditionist Poetry. The aims of New Traditionism include the creation of poems and other artworks that are new (original and modern) in their thought and vocabulary — he is not afraid to coin neologisms, or resurrect obsolete words, whenever the situation seems to require them — but more traditional in their accessible forms, styles and comprehensibility.

A Bosworthian Sonnet has a final rhymed couplet one foot longer than the other 12 lines, which are usually rhymed or unrhymed pentameters, but are often irregular.